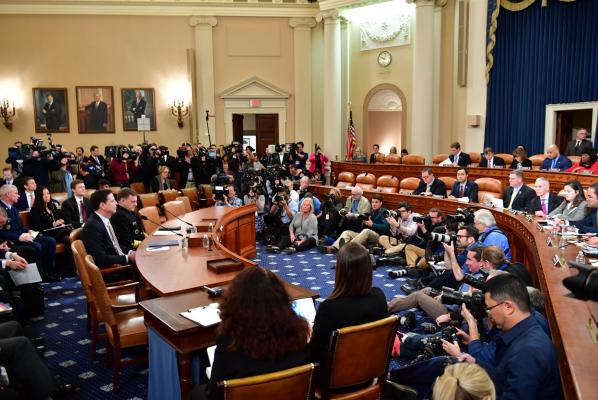 “The department has no information that supports those tweets,” the FBI director said of Trump’s accusation that former President Barack Obama bugged his New York offices.

James Comey, director of the Federal Bureau of Investigation, responds to a question during testimony on Russia’s involvement in the 2016 presidential election and alleged hacking allegations during a House Intelligence Committee hearing on Capitol Hill Monday. Photo by Kevin Dietsch/UPI

March 20 (UPI) — In a very rare public acknowledgement on Capitol Hill Monday, FBI Director James B. Comey confirmed that his agency has been investigating for months whether the Russian government aimed to influence the outcome of the U.S. presidential election — and, now, is looking into whether there may also have been complicity between the Kremlin and the campaign of then-GOP candidate Donald Trump.

At the same hearing, the FBI chief also told the House Intelligence Committee that he has not yet seen any backing for Trump’s recent declaration that former President Barack Obama had listening devices planted at New York City’s Trump Tower in the run-up to the Nov. 8 vote.

“I have been authorized by the Department of Justice to confirm that the FBI, as part of our counterintelligence mission, is investigating the Russian government’s efforts to interfere in the 2016 presidential election,” Comey said in his opening statement. “And that includes investigating the nature of any links between individuals associated with the Trump campaign and the Russian government, and whether there was any coordination between the campaign and Russia’s efforts.”

“In unusual circumstances, where it is in the public interest, it may be appropriate to [confirm],” he said. “As with any counterintelligence investigation, this will also include an assessment of whether any crimes were committed.”

The FBI expanding the probe’s scope to look for potential Trump ties likely happened within the last few weeks. For months, Democrats and some Republicans have called for inquiries to determine whether any collusion existed.

“At the request of congressional leaders, we have taken the extraordinary step in coordination with the Department of Justice of briefing this Congress’ leaders,” Comey said, emphasizing that he was not able to reveal many details of the case.

“I know that is extremely frustrating to some folks. I hope you and the American people can understand.”

Since Trump’s inauguration, multiple members of his administration have come under growing scrutiny for having prior contact with Moscow — specifically, Russia’s ambassador to the United States, Sergey I. Kislyak. Former national security adviser Michael T. Flynn resigned over his contacts with Kislyak in December and U.S. Attorney General Jeff Sessions officially removed himself from all Justice Department investigations into the matter because he also spoke with the diplomat last year.

Trump, though, has repeatedly denied there was any collusion between his team and the Russians.

The intelligence panel chairman, Rep. Devin Nunes, R-Calif., said Monday that the allegations against the Kremlin and Russian President Vladimir Putin are not surprising.

“The fact that Russia hacked U.S. election-related databases comes as no shock to this committee. We have been closely monitoring Russia’s aggressions for years,” he said.

“Putin hated Secretary [Hillary] Clinton so much that he had a clear preference for the person running against Secretary Clinton,” Comey said.

At the hearing, the FBI director also addressed another subject of substantial interest recently — a series of March 4 tweets by Trump that accused Obama of having wiretaps planted at his Manhattan headquarters in mid- to late-2016.

“With respect to the president’s tweets about alleged wiretapping directed at him by the prior administration, I have no information that supports those tweets and we have looked carefully inside the FBI,” Comey said, replying to a plea from Rep. Adam Schiff, D-Calif., for clarity on the accusations. “The Department of Justice has asked me to share with you that the answer is the same for the Department of Justice and all its components.

“The department has no information that supports those tweets.”

Schiff also sought to make clear that Obama could not have single-handedly had bugs planted in Trump’s offices — even if he had wanted to.

“No individual in the United States can direct electronic surveillance of anyone. It has to go through an application process, ask a judge,” Comey said.

“So President Obama could not unilaterally order a wiretap of anyone?” Schiff asked, to which Comey answered, “No president could.”

Also testifying at the hearing Monday, National Security Agency head Adm. Michael Rogers emphatically debunked additional questions about whether the former president may have instead enlisted British intelligence to eavesdrop on Trump’s campaign in Obama’s behalf.

“My view is the same as Director Comey. I’ve seen nothing on the NSA side that we engaged in any such activity, nor that anyone ever asked us to engage in such activity,” Rogers said, pointing out that a move like that would “expressly” violate an agreement among the “Five Eyes” — a multinational alliance that includes the intelligence communities of the United States, Great Britain, Australia, Canada and New Zealand.

“Our British allies have called the president’s suggestion that they wiretapped him for Obama nonsense and utterly ridiculous. Would you agree?” Schiff asked Rogers.

“Yes, sir,” the NSA chief replied. “I think it clearly frustrates a key ally of ours.”

During his news briefing Monday, Spicer said Trump continues to stand by his accusation and sees no cause to apologize.

“It’s still ongoing,” he said of the issue.

Earlier Monday, before the hearings began, Trump posted on Twitter, “The Democrats made up and pushed the Russian story as an excuse for running a terrible campaign. Big advantage in Electoral College & lost!”

Another tweet said, “[Former National Intelligence Director] James Clapper and others stated that there is no evidence [of collusion] with Russia. This story is FAKE NEWS and everyone knows it!”

Earlier this month, Clapper, Obama’s DNI for the administration’s final six and-a-half years, emphatically declared that no wiretaps were ordered or planted inside Trump Tower.

“Absolutely, I can deny it,” he said.