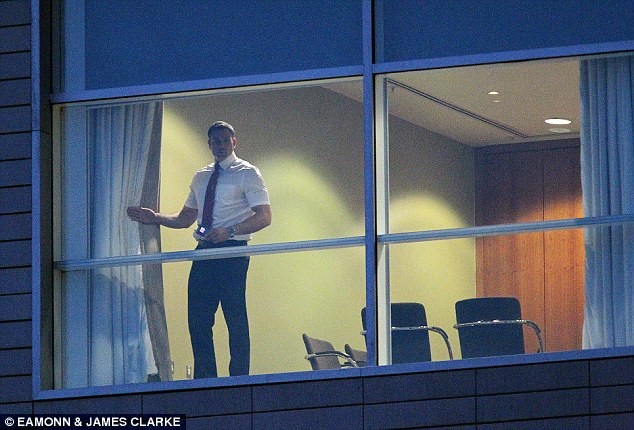 Manchester United have been sweeping their team hotel for bugs in a bid to stop Louis van Gaal’s team talks being listened in on.

Old Trafford officials tested for listening devices at the Lowry Hotel in Manchester on the night before their 3-1 win over Liverpool before Van Gaal ran through his tactics with his players.

And it must have done the trick, with the visitors at Old Trafford completely surprised when Daley Blind swept home a cleverly-worked free-kick to give United a lead they would not relinquish.

The practice of checking for devices around United’s hotels has been in place since the David Moyes era in the 2013-14 season, when a voice recorder was found hidden in the former manager’s team meeting by pranksters.

Now, club security check behind curtains and under tables to make sure they are not caught out again with Van Gaal determined to keep things under wraps.

After scanning the room for listening devices, David de Gea and Co were then allowed into the room to eat and discuss the Liverpool clash.

United stay at the Lowry hotel in Manchester before their home games, with staff checking the rooms used

Earlier this week, Sportsmail revealed how Van Gaal has transformed the club from the ground up since taking over as manager at the beginning of last season.

The players are told to mingle with supporters, as the boss does, the pitches at United’s Carrington HQ have been adapted to match the field at Old Trafford and Van Gaal’s players are made to wait until their manager gives the go-ahead for them to eat lunch.

Carrington is also checked by security for bugs in a bid to make sure the breach from the Moyes era is not replicated.

The policy dates back to David Moyes’ reign, when a prankster’s voice recorder was found in a meeting room

The Dutch manager agreed to change his ways during pre-season training after words with captain Wayne Rooney and senior midfielder Michael Carrick, but he says his players must present compelling arguments to convince him his way is wrong.

‘They have to explain why and how and then I’ll listen,’ Van Gaal said this week. ‘Not only I will listen. Also my assistants are listening and then we discuss it. And then I have to change it.

‘But, yeah, then you have to come with strong arguments, so I have adapted.

‘For example, I have read there are a lot of meetings. That’s the philosophy – that you have to make an analysis of the opponents, then you need a meeting to show that.