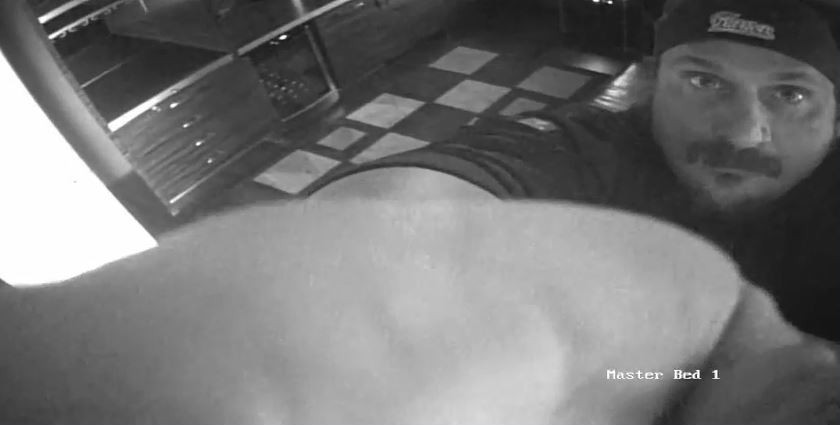 Christopher Rogers is seen in this surveillance still installing the hidden cameras inside of his Airbnb rental. Police say the cameras were used to peer in on his guests inside of the bathrooms and bedrooms.

LAS VEGAS (KSNV News3LV) – The signs and cameras all over the home on Forestdale Court tell only part of the story.

The owner of the home, Christopher Rogers, clearly wanted people to know his property was protected by surveillance cameras. Inside, it was a different story.

The home was advertised on the popular Airbnb app. The service links guests with renters in the community.

But prosecutors allege that Rogers took advantage of his short-term tenants by secretly recording them during intimate moments inside of the home.

News 3 obtained videos of what prosecutors say are an invasion of privacy. Men and women were captured on hidden cameras placed inside of smoke detectors in December and January. In some of the videos, the men and women were nude, using the restroom, showering, or coming in and out of the bedrooms.

Wednesday, Rogers pleaded not guilty to five misdemeanor counts of capturing an image of private area of another person.

One video from December 14 shows Rogers climbing a ladder to adjust the angle, and even wiping the lens clean.

According to court transcripts, three days later, a group of women would stay at the home for free as long as they posted photos of themselves and tagged the defendant’s business on social media. Prosecutors say the women’s right to privacy was violated during the stay.

News 3 spoke with neighbors in the community who said the house was a problem because of loud parties and people racing up and down the street. Some also thought the number of cameras outside the property were “creepy”.

Grand Jury transcripts reveal the cameras were discovered in January by a group staying at the home for the Consumer Electronics Show.

The transcripts say one tenant became suspicious of the visible cameras. He testified that he had asked the property manager if there were any cameras inside of the bedrooms. The person testified that the manager told him, “Absolutely not”.

The camera Rogers was seen adjusting is labelled, “Master Bed 1” in the bottom right-hand corner. Prosecutors say the image is clear evidence of a crime. Rogers maintains his innocence.

The case is considered an ongoing investigation. Metro is seeking more victims who may have stayed at the home while the cameras were recording.

Rogers is out on bail and due back in court for his trial on March 20.