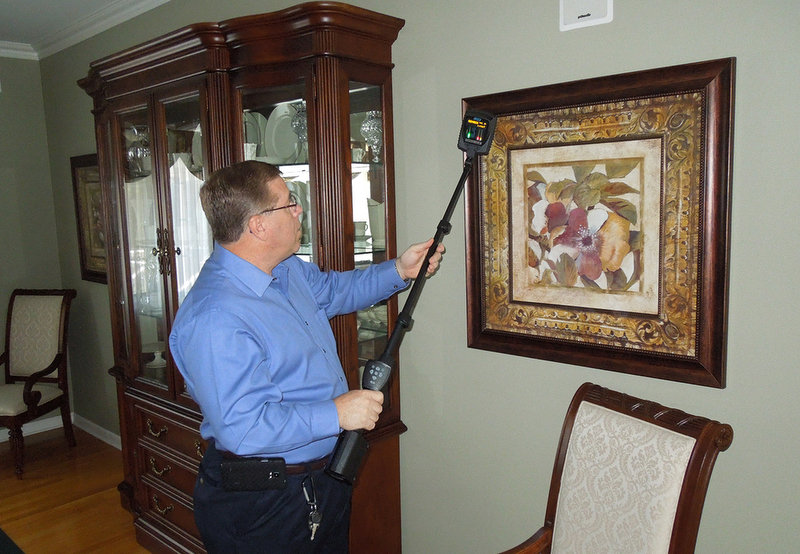 Jimmie Mesis, owner of USAbugsweeps.com, conducts a sweep for hidden devices. Technological advances and dropping prices for video and audio recorders, have created what Mesis describes as an epidemic of voyeurism. (Submitted photo)

In the final days before the start of the new school year, teachers were busy setting up their classrooms and principals were preparing to welcome students back from summer vacation.

In addition to the usual cleaning and organizing that takes place in the final days leading up to the start of the new school year, some administrators were also having their schools swept for spy cameras.

With the rise of cheaper and smaller technology, it’s easier than ever for someone to plant a tiny camera in a restroom, locker room or under a desk.

A former teacher at Gloucester County Institute of Technology was indicted in April on charges that he video recorded up the skirts of 24 students using a small recording device, according to prosecutors.

Mesis is also editor and publisher if PI Magazine, the only international trade magazine for private investigators.

His company conducts three or four sweeps a week. “We travel the world,” he said.

Mesis sees an uptick in business this time of year from school districts seeking his services. “We’re gonna get super busy right now because school is coming back in session,” he said in late August.

He said his company works with more than a dozen districts in New Jersey alone, though he declined to identify them for confidentiality reasons. Administrators are taking these steps as preventative measures, he said, not because something has actually happened yet.

Schools that aren’t checking for these devices are doing a disservice to students, parents and staff, Mesis contends. Schools should have locker room and shower areas checked on a fairly regular basis in order to ensure student safety.

Call in the pros

Conducting a professional search requires more than $100,000 in specialized equipment that can detect digital and analog signals, wired and wireless transmissions, locate electronic components and even detect cameras when they are not activated, Mesis explained.

They check for cameras under sinks, hidden in restroom fixtures and use bore scopes to seek out devices hidden in vents. They even check screws holding fixtures and wallplates to ensure a camera isn’t hidden in the head of the screw. Yes, those actually exist.

“You can put cameras in anything nowadays,” Mesis said. He’s seen them hidden in ceiling fans, lamps, electrical outlets, pens, cellphone chargers, books and the list goes on.

The size of these devices makes them nearly impossible to find simply by looking around a room. The lens opening for a hidden camera can be as small as the thread hole for a button on your shirt.

“You’re not going to find that,” Mesis said.

A thorough, professional scan for these devices isn’t cheap.

Oscar A. Estevez-Elvira is facing an invasion of privacy charge.

Sweeping a school or home can cost thousands of dollars. It all depends on the size of the area being evaluated.

There aren’t many companies offering these services.

“This is a specialized niche,” he said. “Only about five of us in the whole state are certified and qualified to do this properly.”

Technological advances and dropping prices for video and audio recorders, as well as GPS trackers, have created what Mesis describes as an epidemic.

“There is definitely an epidemic of voyeurism and violation of people’s privacy,” he said. In many cases, the activity is sexual. In other cases, it’s about intelligence gathering.

“People are bugging the hell out of each other. It’s happening every single day in our country,” Mesis said. “It’s affordable and people don’t care about the law.”

People secretly record others for a variety of reasons, Mesis explained. Some spouses use recordings to catch a cheating husband or wife. Businesses might spy on competition to gain some sort of advantage.

Then you have the cases often reported by police, in which cameras are hidden in public restrooms, dressing rooms, locker rooms, tanning beds or other areas in order to record children and adults.

Students in dorms might hide a camera to catch a roommate stealing or to record sex acts.

Sometimes a husband might secretly record sexual encounters with his wife because she isn’t willing to be recorded, Mesis said.

While many culprits use these videos for self-gratification, those involving children are often shared online. Pedophiles will trade videos, Mesis explained. In these situations, “The only way you can get a video is if you provide one,” he said.

Other recordings are shared on websites catering to sexually explicit voyeur videos.

While law enforcement officials in New Jersey say they haven’t seen an epidemic of these cases in their coverage areas, they do occur from time to time.

“I know in Gloucester County we have had several cases in the past few years in which people have surreptitiously hidden cameras in various public places,” said Detective Gregory Malesich, with the Gloucester County Prosecutor’s Office. He handled the investigation of the former GCIT instructor.

The charges faced by someone caught illegally spying on others depend on the nature of the spying, Malesich explained.

How can you protect yourself?

You can purchase devices marketed as spy camera detectors. Several smartphone app developers claim their products can detect the presence of hidden cameras.

For $100 you can purchase a device online called the SpyFinder Camera Detector. It works like this: Look through the viewfinder, which is surrounded by red LED strobes. Press a button and your view of the room around you is bathed in pulsing red light. If that light passes over a small glass object like a camera lens, the light will bounce off of it, giving you a bright reflection.

While just looking around a room unaided won’t reveal what may be hidden, there are red flags, experts suggest.

“Look for anything that’s out of place,” advised Terrance Stanford, owner of South Jersey Surveillance Systems in Sicklerville. That includes fixtures that may appear broken or if there are multiple smoke or motion detectors in a space. One could conceal a hidden camera. Other possible clues could be wall plates with no obvious function.

Another danger is ceiling tiles. flexible cameras, similar to the ones doctors use for endoscopies, can be hidden in a tile.

“It’s easy for someone to punch a small hole into a ceiling tile and fish that through it,” Stanford said.