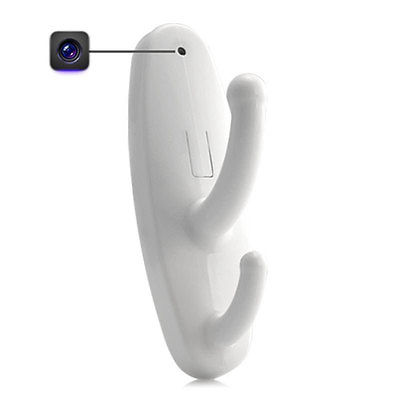 (CNN) It looked like a normal clothing hook — small and unsuspecting, mounted on the back door of her sleeping quarters on the Transocean Deepwater oil rig.

But to her, for some reason it just didn’t feel right.

“The rooms are pretty bare and minimum, so when you notice something that’s different, it kind of sticks out to you.”

Though 26, she’d been on plenty of rigs before. In fact, she’d spent much of her life dedicated to working offshore in the Gulf of Mexico. But she says she’d never seen something like this.

She dismissed the weird feeling and thought to herself, “Well, it must just be extra storage.”

That was a Friday in August 2015. Four days later, the hook was gone.

About the same time she noticed it was missing, she says the only other woman on the rig mentioned that the same clothing hook had appeared in her room out of the blue.

They opened the hook and found what she says was actually a covert, motion-activated recording device. Inside, she says, was a tiny camera and memory card capable of holding footage.

After plugging the memory card into her own computer, she says she saw footage of her colleague being unsuspectingly recorded. Assuming the worst, she says she could only conclude that she too was recorded in the previous days. She says she believes the footage of herself had already been downloaded by the perpetrator by the time she got to look at the video.

“I could see the pain that I was feeling in my heart in her eyes. We both knew that we had been recorded and were victims.”

For days, she says, her nude body was recorded while she thought she was alone in her sleeping quarters. She says she went immediately to her supervisors to report what happened.

In a lawsuit filed in March, she calls herself Jane Doe and alleges that not only were her supervisors at Transocean Offshore Deepwater Drilling and Schlumberger Technology dismissive of what happened, they did not take the basic investigative steps to find out who was responsible.

The person or people who planted the device have not been caught.

She is asking for damages of more than $1 million.

At the time she discovered the hook on August 10, 2015, the woman alleges that she asked that Transocean — the owner of the Deepwater Invictus rig — as well as supervisors at BHP Billiton, Aramark Services and Schlumberger Technology to check security camera footage to find whoever was responsible.

“They told me no such footage existed.”

She claims she asked for a lockdown of the vessel to find the perpetrators. Or, at the very least, interview crew members.

She says “they did nothing.”

Instead, the next day on August 11, 2015, she and her rig supervisors agreed it was best for her safety to leave the rig while the investigation was conducted. She was taken off the rig and flown to Houston. From there she travelled back home to rural Louisiana.

Meanwhile, they assured her an investigation would take place in her absence, her complaint says.

“I wanted it criminally reported, I wanted to be part of the investigation process, I wanted to know what was going on, and honestly I felt like I, from the day that I left that rig, I had zero control.”

According to her lawsuit, “… Defendants Transocean and BHP Billiton representatives refused to perform the requested searches, wasting valuable time and opportunities to limit damage.”

Jane Doe says she was humiliated.

“They were going to, you know, keep me involved, and they were going to have this big investigation … and after that, to be honest, I didn’t hear anything else,” she told CNN in a phone interview.

“There wasn’t anybody that really seemed interested in how I was doing, and I just felt like there was no control.”

Request for police report to be filed

In the weeks that followed, emails reviewed by CNN between Jane Doe and legal representatives for the oil rig show that Jane Doe asked for a police report to be filed.

In one email reviewed by CNN, Jane is told by a lawyer for Schlumberger Technology, “Transocean is leading the investigation.”

That lawyer encouraged her to contact local law enforcement on her own. Since the incident occurred offshore in the Gulf of Mexico in federal waters, Jane Doe says rather than go to the nearest local police station, she and her attorney went to the closest FBI field office in Louisiana.

“They told us too much time had passed to investigate,” Jane Doe’s attorney, Kurt Arnold told CNN.

But according to the FBI, that wasn’t the problem. The issue was that, beyond testimony, Jane Doe did not have physical evidence that she had been recorded. Without physical proof and no evidence that a federal statue had been violated, they could not pursue a case, the FBI told CNN.

The memory card with footage of Jane Doe was never recovered either, Arnold told CNN.

In a confidential settlement letter reviewed by CNN between Jane Doe’s attorney and an attorney for the four corporate defendants, a settlement was offered to Jane Doe as a consolation for her claims.

“As I and my colleagues from BHP, Transocean and Aramark made clear, we deeply regret the events which occurred on the Invictus in August 2015,” the letter reads.

“Having said that, we also believe that the parties responded promptly and with genuine concern in an effort to appropriately address the situation. This included conducting a thorough investigation and allowing – to take an extended paid leave of absence.”

It goes on to say, “…as we discussed, steps have been taken to ensure that such a situation does not occur again in the future…[W]e simply do not believe the facts or the applicable law support the claims asserted in your draft Petition, nor do we think your damage assessment is reasonable or realistic.”

On behalf of the four corporate defendants, they offered her a “good faith effort.” One lump sum amount. It was less than a year’s salary. The offer was conditional on her resignation. Jane Doe rejected the offer.

CNN attempted multiple times to reach the corporate defendants’ attorney for comment. After waiting more than a week, we were given no response. Transocean never replied to CNN either after multiple attempts, nor did BHP Billiton Petroleum.

Aramark Services Inc., also listed in the lawsuit, told CNN, “It’s not appropriate for us to comment on pending litigation.”

‘The way they handled it was not right’

“This was not right what they did to me, or to us, and the way they handled it was not right, and I want to make sure that this never happens to anyone again.”

Jane says she wakes up every day worried that video of her will end up online, or worse.

“I didn’t bring any extra attention to myself. I didn’t wear makeup, I wore loose fitting clothing, I didn’t even go to the gym, just to kind of keep myself separated so I could gain the respect of these men. ”

As for Jane’s colleague who was also allegedly recorded, the woman chose not to be a part of the lawsuit. Jane, however, says she believes the other woman is still working for the company.

Jane is still employed with the company; however, she remains on disability for stress related ulcers and “mental anguish” related to the incident, her attorney says. She says she has not been cleared by her doctor to return to work.

But after what she experienced, Jane says, she might never go back to working in the field to which she dedicated her life.

“On the rig, it’s very hard to gain respect … being a woman in a man’s world, and I tried very hard to do so.”

“I really had hoped to be a pioneer in this industry, and really set a positive standard for women. … My privacy was taken away from me. It’s been very difficult.”