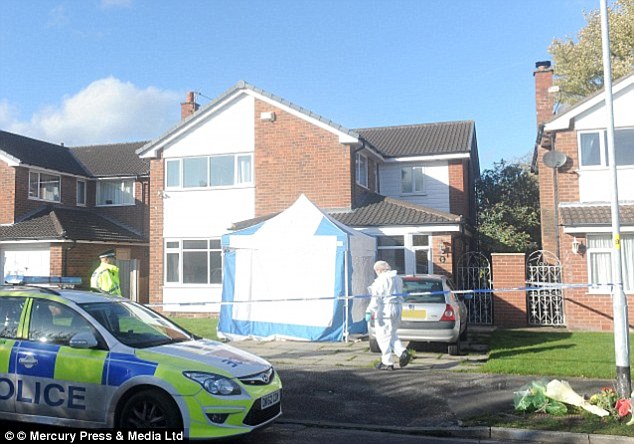 A jealous computer programmer who stabbed his wife 51 times after bugging her mobile phone has been jailed for life for murder.

Andrew Munro, 51, carried out the frenzied attack on wife Clare, 47, at their home in Culcheth, Cheshire after she told him their marriage was over.

A judge ordered Munro serve at least 27 years behind bars after saying he made his wife’s final weeks ‘almost unbearable’ with a ‘terrifying campaign of sinister and intrusive surveillance’.

IT expert Andrew Munro, 51, (left) knifed his wife Clare (right) 51 times with an eight-inch bread knife at their home in Culcheth, Cheshire, after discovering she was cheating when he used tracking devices to spy on her

Preston Crown Court heard IT expert Munro used his technical expertise to track the mother-of-three’s whereabouts after he learned she was having an affair.

He even bugged her mobile phone to enable him to remotely take video shots of her when she was away from the family home.

After Munro was sentenced today, the victim’s family branded him a ‘cruel and evil monster’ who had murdered ‘a magical person’ who was ‘a pillar of her community’.

John McDermott QC, prosecuting, had told the court there had been marital problems for several months before Mrs Munro was murdered on November 2 last year.

Mr McDermott told the court: ‘The evidence suggests Clare Munro was not proud of her affair and it is clear that in the weeks before her death had stopped seeing the man while she tried to make a go of their marriage.

‘Andrew Munro had himself had extra-marital affairs both when he was married previously and during the early part of his marriage to Clare.

‘His former wife also speaks of his controlling and temper-ridden personality.

‘The defendant became aware of the affair. This resulted in arguments and recriminations. At first Clare Munro denied it but it became apparent that her husband was spying on her.’

The attack took place at their home in the village of Culcheth, Cheshire (pictured as police investigate)

On the morning of her death, Mrs Munro rang her boyfriend to say she had told her husband that the marriage was over.

‘She said he could leave or stay but they would no longer be man and wife,’ the prosecutor said.

‘He had not taken it well and was pacing around with his head in his hands.’

Munro was in the kitchen of the family home slicing a malt loaf later that day when, without warning, he embarked upon his ‘savage assault’ in which he stabbed his wife 51 times.

The court was played a recording of a harrowing 999 call in which Mrs Munro was heard gasping ‘I’m dying, I’m dying’.

Prosecutor Mr McDermott said the defendant later provided a statement in which he said he simply lost his self-control.

Sentencing Munro, who worked for credit card firm MBNA, Mr Justice Turner told him: ‘The fact that Clare was seeing another man was the catalyst for this murderous attack.

‘During the weeks before the murder you subjected her to a terrifying campaign of sinister and intrusive surveillance.

‘You used your expertise as a computer programmer to spy on her with various devices. Most chilling of all was a device on her mobile phone to take video shots of her when away from home. You made your wife’s final weeks almost unbearable.

‘The murder was the terrifying culmination of sinister intimidation.’