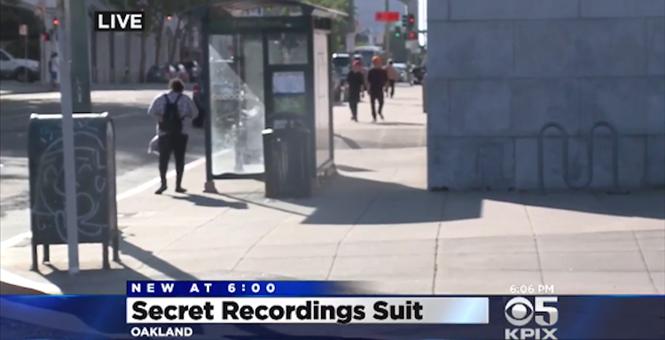 Well, if you’ve ever read Philip K. Dick’s A Scanner Darkly and were freaked out about the government recording everything you do in his dystopian vision of the United States, this story coming out of the San Francisco-area won’t assuage your concerns about federal surveillance programs. Between 2010-2011, FBI agents planted recording devices in public bus stops and recorded conversations. It was part of an investigation into whether real estate investors were guilty of bid rigging and other fraudulent acts (via CBS SFBayArea):

Hidden microphones that are part of a clandestine government surveillance program that has been operating around the Bay Area has been exposed.

Imagine standing at a bus stop, talking to your friend and having your conversation recorded without you knowing. It happens all the time, and the FBI doesn’t even need a warrant to do it.

FBI agents hid microphones inside light fixtures and at a bus stop outside the Oakland Courthouse without a warrant to record conversations, between March 2010 and January 2011.

Federal authorities are trying to prove real estate investors in San Mateo and Alameda counties are guilty of bid rigging and fraud and used these recordings as evidence.

A lawyer for one of the real estate investors that’s been accused has filed a motion to throw out the recordings. Some might argue that the innocuous conversations of those outside the courthouse were discarded, but that’s not the point. This is about government recording citizens without a warrant in public places. It may be legal, but is it right? Do you feel comfortable with government planting recording devices, capturing conversations that might be sensitive?  Again, I have no problems with such surveillance when it goes through the proper legal process. Want to tap my phone? Get a warrant. Want to search my home? Get a warrant. Want to plant recording devices in a public bus stop? Get a warrant. As we’ve seen in times past, especially when the ability to wiretap was discovered during Prohibition, government will always act beyond the rule of law and the confines of the Constitution until they’re told otherwise.