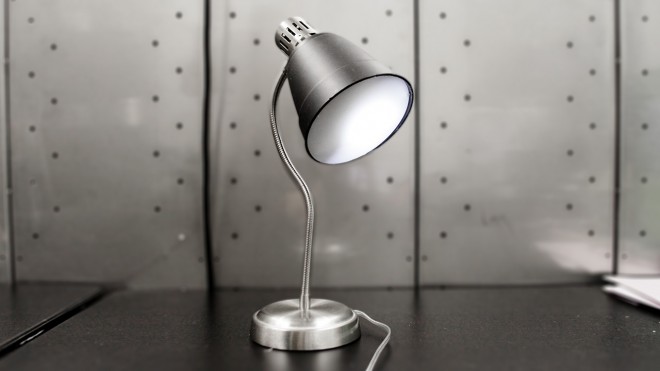 Brian House and Kyle McDonald’s creation, the Conversnitch, impersonates a lightbulb or lamp while eavesdropping on and livetweeting nearby conversations. Photo: Kyle McDonald

As former NSA director Michael Hayden learned on an Amtrak train last year, anyone with a smartphone instantly can become a livetweeting snoop. Now a whole crowd of amateur eavesdroppers could be as close as the nearest light fixture.

Two artists have revealed Conversnitch, a device they built for less than $100 that resembles a lightbulb or lamp and surreptitiously listens in on nearby conversations and posts snippets of transcribed audio to Twitter. Kyle McDonald and Brian House say they hope to raise questions about the nature of public and private spaces in an era when anything can be broadcast by ubiquitous, Internet-connected listening devices.

“What does it mean to deploy one of these in a library, a public square, someone’s bedroom? What kind of power relationship does it set up?” asks House, a 34-year-old adjunct professor at the Rhode Island School of Design. “And what does this stream of tweets mean if it’s not set up by an artist but by the U.S. government?”

The components of Conversnitch, including a Raspberry Pi miniature computer, an LED light source and a plastic flower pot. (Click to enlarge) Photo: Kyle McDonald

The surveillance gadget they unveiled Wednesday is constructed from little more than a Raspberry Pi miniature computer, a microphone, an LED and a plastic flower pot. It screws into and draws power from any standard bulb socket. Then it uploads captured audio via the nearest open Wi-Fi network to Amazon’s Mechanical Turk crowdsourcing platform, which McDonald and House pay small fees to transcribe the audio and post lines of conversation to Conversnitch’s Twitter account. “This is stuff you can buy and have running in a few hours,” says McDonald, a 28-year-old adjunct professor at the Interactive Telecommunications Program at the Tisch School of the Arts.

House and McDonald first tested Conversnitch at the “Prism Break Up” Eyebeam art exhibition in Manhattan last October, but wouldn’t say where else they’ve planted it, citing legal issues. “We recognize that this device can be used in an illegal way, and we will not admit to using it in that way,” McDonald says cagily. “It has potentially been deployed in various places.”

But a video they’ve posted online (embedded below) shows two people with obscured faces planting Conversnitch in a light fixture in a New York McDonald’s, disguised as a desk lamp in a bedroom and a bank lobby, in a library, and inside a lamp post in Manhattan’s Washington Square Park. A glance at the Conversnitch Twitter feed shows fragments of conversations about topics as private as a failed course, a job interview rejection, someone’s frayed relationship with his or her boss and criticisms of a politician.

The two artists did caution Mechanical Turk workers to obscure any names mentioned in eavesdropped conversations by reducing them to a single initial. And they admit that the transcriptions they’ve received are also less than 100 percent trustworthy; they’ve deleted several tweets amid suspicions that turkers were fabricating quotes.

But if Conversnitch does manage to cause outrage or controversy, all the better, says McDonald. After all, his work first hit the spotlight in 2011 when he installed a program on Apple Store computers that automatically captured images of customers’ faces and uploaded them to his server. Apple responded by calling the Secret Service, which executed a search warrant on McDonald’s apartment and confiscated two computers.

Conversnitch being planted in a library. House and McDonald obscured the individual’s face to avoid legal issues. Photo: Kyle McDonald

In fact, McDonald also participated briefly in an earlier project similar to Conversnitch known as Chattrbot, which recorded conversations in a room and posted bits to Twitter. But Chattrbots creators warned their subjects that they were being recorded and had them agree to a data use policy. That safeguard took all the impact out of the experiment, says McDonald. “I think you have to make things provocative or even dangerous if you want people to pay attention,” he says.

He also argues that a tool like Conversnitch is just a taste of the real privacy threats facing Americans in an age of the sweeping NSA surveillance revealed by Edward Snowden; the NSA contractor’s bombshell leaks came to light around the same time McDonald and House began working on their project.

“You can’t make this stuff up anymore,” says McDonald. “Here were Brian and I trying to make something kind of scary, something that makes you wonder if someone’s watching you all the time. And then Snowden says, ‘They are.’”