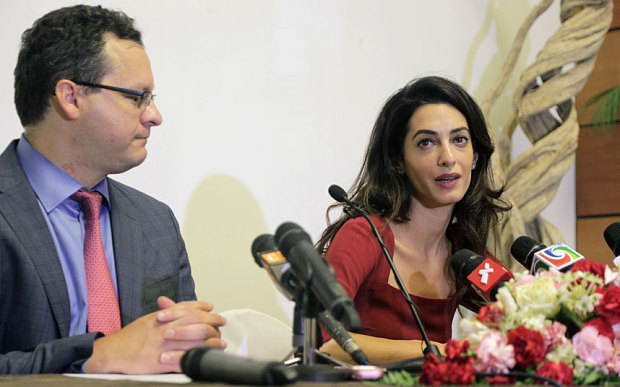 Amal Clooney and her fellow human rights lawyer Jared Genser have accused the Maldives’ government of brazenly bugging them during a supposedly confidential jailhouse meeting with the country’s deposed former president.

The lawyers had just left Mohamed Nasheed’s island prison when they received a phone call from his wife revealing that senior Maldivian officials were already fully aware of a highly-sensitive secret discussion with her husband.

“It is the most flagrant breach of the fundamental right of a defendant to be able to have confidential client-attorney discussions about sensitive information for his case,” Mr Genser told The Telegraph.

He said that there had been repeated incidents when private conversations between Mr Nasheed and his Maldivian lawyers had clearly been relayed to prosecutors, so he said he was “utterly unsurprised but still outraged”.

Mrs Clooney, the wife of the actor George, and Mr Genser met the ousted president for two hours at the high-security jail to discuss their fight to obtain his release from prison.

The first democratically elected president in the history of the Indian Ocean island state was given a 13-year sentence this year for what they have called a “phoney” terrorism conviction at a “political show trial”.

The lawyers had scanned the nondescript meeting room, with fading yellow walls and table and six chairs, for any sign of a listening device but saw nothing suspicious.

Mr Genser said that he had earlier contacted Toby Cadman, a British lawyer representing the Maldives on a contract for Cherie Blair’s Omnia Strategy legal firm, to seek assurances that the meeting would be private.

“He said he would pass on our message but it is obvious that they were listening to us in real-time,” said Mr Genser.

The apparent bugging became clear just 20 minutes after the meeting ended when Laila Ali Abdulla, the former first lady, called the lawyers from London, where she is currently spending time with their two daughters.

Mrs Nasheed had been contacted by a friend in the capital Male who in turn had been called by a senior government official saying he had been informed of a key piece of information from the meeting and wanted to know her views.

“We had never discussed that issue with anyone else and Leila didn’t even know we were going to be talking about it on Thursday morning with her husband, “ Mr Genser said.

Mr Cadman said on Thursday night that the Maldivian prison service rejected the allegations of bugging and monitoring but that the government will investigate the claims.

“As a barrister, I can only reiterate the importance of client-attorney privilege,” he added.

In a separate development, Mrs Clooney revealed that Mr Nasheed’s legal team intended to urge his international supporters, including David Cameron, to press for sanctions against key Maldivian justice officials after a United Nations report on the case is issued this autumn.

The use of targeted measures such as travel bans and overseas asset freezes would be intended to ratchet up pressure on the Maldives if it does not release Mr Nasheed, a human rights and environmental activist who replaced the islands’ long-time dictator but was ousted after street protests.

The international legal team has filed a petition about Mr Nasheed’s case with the UN working group on arbitrary detention, a panel of experts created by the world body’s human rights council.

“The next stage is to pursue targeted sanctions and any other measures until this matter is resolved,” Mrs Clooney said.

Britain on Thursday night delivered a strongly-worded warning to the Maldives to release Mr Nasheed and his fellow political prisoners or face growing international pressure.

“The trial of former President Nasheed was very damaging for the Maldives’ international reputation,” Hugo Swire, the Foreign Office minister for Asia, told The Telegraph.

“It is in the Maldives’ own interest that they restore confidence in their judicial independence and in their respect for democratic principles. This means releasing all political prisoners, Mr Nasheed included. We have set this out in public and in private repeatedly to them.

“Without progress in these areas, the Maldives risks increasing and unwelcome international attention through the autumn, with the next session of the UN Human Rights Council approaching, the UN General Assembly later this month and of course the Commonwealth Heads of Government summit in November.”

Mrs Clooney noted that Britain, the United States and the UN had all concluded that the trial was unfair and the conviction unsafe.

Their case is based on a raft of complaints about the speedy trial that Mr Nasheed was put through earlier this year for allegedly ordering the removal and abduction of a judge when he was president.

The British-educated politician was not allowed to call any witnesses and was given very little time to prepare his defence against charges brought under terrorism legislation.

Mrs Blair’s colleague Mr Cadman responded that the call for sanctions was inappropriate. “Mr Genser has suggested this is a political show trial,” he said. “It should not be forgotten that President Nasheed was convicted of a very serious offence. There is now an appeal process to address any concerns that he may have concerning his conviction.”

Mrs Clooney and Mr Genser are also to visit Sri Lanka and India for meetings with political leaders as they try to build a coalition against the government of Abdulla Yameen, the former dictator’s half-brother who narrowly beat Mr Nasheed in controversial elections after the court stepped in to order a rerun.

Mr Yameen’s government has cracked down on dissenters and Mr Nasheed’s party says that more than 1,000 members have been arrested.

In the latest sign of the escalating tensions, a young Maldivian member of the ex-president’s legal team was left fighting for his life after he was stabbed in the head in broad daylight by unknown assailants in Male. “It’s a miracle he survived,” said Mrs Clooney.