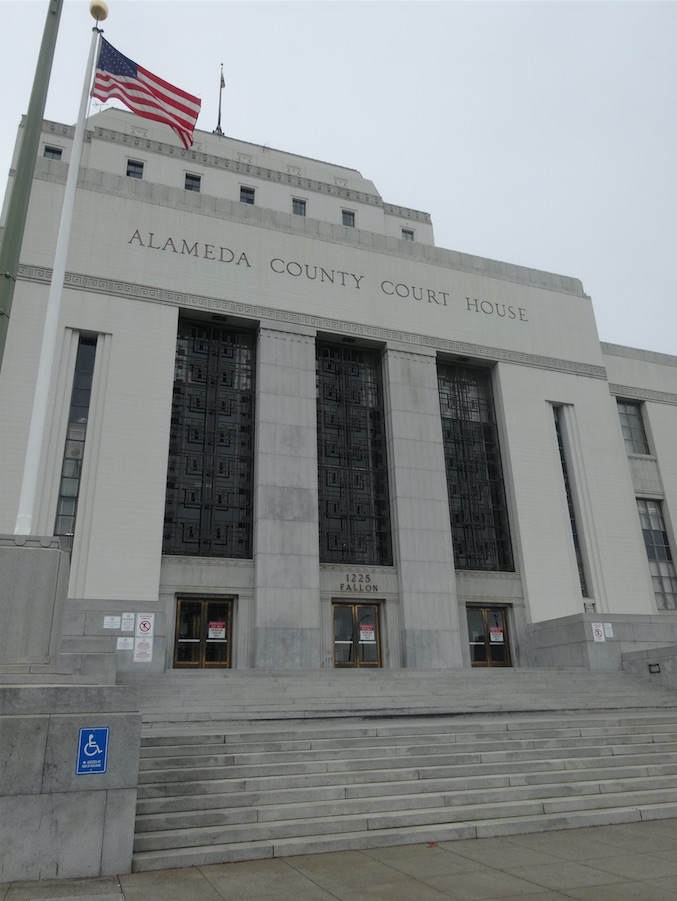 Federal agents planted hidden microphones and conducted secret video surveillance at Alameda County’s Rene C. Davidson Courthouse for ten months, despite having no court warrant. The surveillance operation was part of an investigation into alleged bid rigging at foreclosed property auctions where thousands of houses and apartment buildings were sold by banks. But defense attorneys for some of the individuals accused say the FBI’s surveillance tactics violated their clients’ constitutional rights, and everyone else whose conversations might have been captured on tape.

One of the people recorded by the hidden surveillance devices was Michael Marr, the East Bay landlord who is at the center of our feature story in this week’s edition of the Express. Marr and his business associates frequently attended the foreclosure auctions. They bought hundreds of properties, many of them in Oakland, but were indicted in November 2014 on charges that they conspired to rig the auctions. Marr’s case is now being heard in federal court. He has pleaded innocent.

Some of the government’s case against Marr and his associates is based on evidence gathered using secret microphones at the Rene C. Davidson Courthouse and also the Contra Costa County courthouse in Martinez.

At the Rene C. Davidson Courthouse in Oakland, the FBI planted hidden microphones inside light fixtures on the courthouse’s exterior steps to capture the conversations of people attending the foreclosure auctions. Cameras and microphones were installed in parked Alameda County vehicles next to the courthouse. The FBI even hid a microphone in the AC Transit bus stop on Fallon Street, and dropped a bugged backpack next to a statue inside the courthouse, according to a letter sent by US Justice Department attorney Kate Patchen to Marr’s attorneys on March 15. The surveillance was ongoing from March 2010 to January 2011.

In Martinez, the FBI planted microphones in bushes, at a bus stop, on a pole, and inside parked and roving vehicles near the auction site.

Marr’s attorneys argue that the surveillance amounted to an illegal search that violated the Fourth Amendment rights of anyone whose voice might have been recorded. The recording may have also violated Title III of the the Omnibus Crime Control and Safe Streets Act of 1968, otherwise known as the Wiretap Act. Title III bars the interception and recording of private conversations, even those which may have been conducted in a public space. Marr’s attorneys are arguing that any evidence derived from the recordings should be thrown out.

“Speaking in a public place does not mean that the individual has no reasonable expectation of privacy,” Marr’s attorneys wrote in a March 23 motion to Judge Phyllis Hamilton.

Calling the surveillance operation “dragnet electronic eavesdropping,” Marr’s attorneys said that the sensitive conversations of other persons unconnected with the foreclosure auctions may have been recorded.

“Private affairs are routinely discussed as citizens, their lawyers, and even judges walk to and from court, and lawyers often take clients aside outside the courthouse for privileged conversation,” they wrote.

The same type of warrantless eavesdropping was revealed last year in San Mateo County where FBI agents conducted a nearly identical investigation of bid rigging at foreclosure auctions that resulted in the collection of 200 hours of audio and video recordings. In the San Mateo case, defense attorneys are arguing that not only should evidence contained in the recordings be thrown out, but that they also should have the ability to challenge other “tainted” evidence that might have been obtained as a result of information the government got from the recordings.

What’s more, the defense attorneys in the San Mateo case said they believe the federal agents committed felonies when they planted the bugs.

Facing this challenge, government prosecutors in San Mateo have moved to withdraw the recordings as evidence at trial, but the defense has called this move an attempt by the FBI to “cut its losses and sweep its criminal conduct under the rug.”

Similarly, federal prosecutors have said they don’t intend to use the recordings made at the Alameda County Courthouse against Marr in his trial, but Marr’s attorneys are seeking to throw out all evidence that might be linked to the recordings.